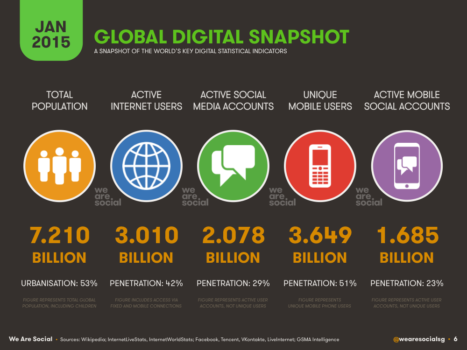 It’s a digital world, my friends. No matter how you look at it (or try to escape it!), every day more and more people around the globe are becoming better connected to the internet, each other and organisations. According to We Are Social’s Digital, Social and Mobile in 2015 report, 2014 was a landmark year for growth across the digital space and 2015 is shaping up to give us even more impressive statistics.

Thanks to a boost from the growing availability of affordable mobile devices and data connections, nearly 42% of the world’s population now has access to the internet. The report shows that mobile web traffic has increased 39% since this time last year, and one-third of all web pages are currently served to mobile phones.

It’s interesting to note that the division of web traffic among devices varies widely between countries. For example, web traffic in India is undeniably dominated by the mobile – 72% of web traffic comes from mobile phones while laptops and desktops only account for 27%. In contrast, the figures for Australia show laptops and desktops accounting for 61% of web page views and mobile phones coming in at 26%. The UK shows similar numbers as Australia, with laptop and desktop traffic reported at 58% and mobile phones accounting for 27% of page views. Even though the percentage of mobile web traffic is significantly lower in Australia and the UK than India, that figure is on the rise across all three countries.

So what does this mean for organisations? As your customers become digital, they expect you to be as well. Referred to as The Digital Imperative, today’s marketplace requires organisations to engage with customers across a variety of channels and devices. Organisations must get to know their customers in order to provide a positive experience across the entire customer journey, and understanding their access to the internet and devices such as mobile phones is a big part of that. Consistent and accurate access to information across channels – web, mobile, social – is essential for customers in today’s digital world.