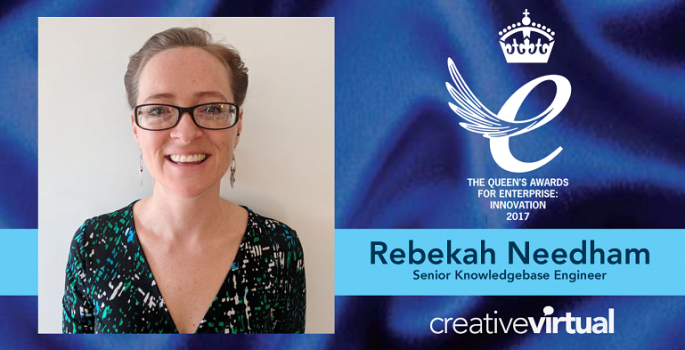 Creative Virtual is one of only four companies in London to be recognised by The Queen’s Awards for Enterprise in the category of Innovation in 2017. The company was selected for this honour not only for our innovative technology, but also because of the hard work and dedication of our global team. Creative Virtual’s experienced, expert team is what sets the organisation apart from others in the industry. As part of the five-year celebration of our Queen’s Awards for Enterprise, we’re talking with some members of the Creative Virtual team about the technology, their involvement in the industry and what winning this award means to them.

Today we introduce Rebekah Needham, Senior Knowledgebase Engineer. Rebekah has been a part of the virtual agent industry since the Summer of 2008 when she first worked on a Spanish proof-of-concept for Creative Virtual. She officially joined the London-based team in 2009 and over the years has been involved with virtual agent projects around the world. She’s built chatbots in the UK, trained new hires in the US and supported customers and partners in Asia Pacific. She shared with me her insights on how culture is driving virtual agent implementation in different parts of the world and why she wasn’t surprised to hear Creative Virtual was being recognised for innovation by the Queen.

What are a few highlights from your time working with Creative Virtual? What do you enjoy most about being a part of the team?

Reading through Jeff’s interview [read the interview with Jeff Clifford here] made me chuckle and think back to being trained by Jeff myself. At the time, I was living in the US and he was in the London office. I had a two-hour NLP [natural language processing] training session and was expected to start working on a Spanish proof-of-concept. I remember thinking, “What have I got myself into?!” Later Jeff told me he was impressed that I “got it”; I had to laugh and tell him I was glad he thought I “got it”!

Obviously, I had more thorough training when I officially joined the team and now I’m the one training new people. I’ve trained some of the guys in the US office and am now training in Asia Pacific, sometimes in languages I don’t speak. I find it’s a good test of my knowledge as I need to explain things in a way that the person I’m training can take information and apply it in another language. I also need to ensure a trainee understands well enough to train other people on his or her team.

Having opportunities to rise to a challenge is one of the things I enjoy most about being part of the Creative Virtual team. Taking on challenges is something we do regularly as a company; we’re always pushing ourselves to do more and be better. Whatever country you’re in or projects you’re working on, the whole team works together to find solutions and help our customers.

I find myself travelling a lot, but I know I always have access to the teams in the UK, US, India, Europe, and Asia Pacific no matter where I may be. We reach out to each other for support, and people don’t hesitate to have calls or help troubleshoot something important at odd hours to accommodate different time zones. Despite the challenges, we can always talk, laugh and have a good time together. I’ve been friends with several people on the team for a long time, and I appreciate having a company culture that encourages us to build those strong relationships.

What differences do you see in the way virtual agents and chatbots are used in different parts of the world?

It’s interesting to look at the ways virtual agent implementations are driven by demands for technology in different countries. In the US, for example, we typically see large enterprises deploying focused solutions that have a very streamlined template. Whereas in Asia Pacific, we are often working with smaller organisations who are looking for a conversational style virtual agent utilising templates that feature an avatar and FAQs. The virtual agents really are a reflection of what’s going on in that part of the world, both culturally and technologically.

I feel that Creative Virtual’s global expansion has really helped drive our innovation forward. Each new region has their own set of demands and requirements for our virtual agents to be successful. As a company, we are perceptive to these challenges and flexible enough to deliver quickly for our customers – a definite advantage we have over larger competitors. Rich [Mason] is a magical being! As our Head of Innovations, he has been key in helping us address regional differences. The entire company then benefits from these developments regardless of the region that first inspired them.

What are some challenges that organisations face when implementing a chatbot in multiple languages?

When it comes to implementing virtual agents in different languages, NLP works relatively the same way but we’re conscious of the fact that languages are written in different ways – whether that be Chinese which uses symbols instead of letters or Thai which doesn’t use spaces between words, for example. The engine needs to be able to parse each language correctly, and this is a challenge that Creative Virtual has overcome beautifully.

I find that we often act as consultants for organisations looking to deploy virtual agents in multiple languages, guiding them on how to best deliver these solutions. They appreciate how exceptionally flexible we are, both as a company and in the ways our technology can be implemented. At the moment, we have some virtual agents with 5 or 6 different languages in one knowledgebase while others are set up with a separate knowledgebase for each language. As we continue to innovate in this area, there will be an evolution of how multiple languages are managed and how we implement best practices.

What does Creative Virtual winning The Queen’s Awards for Enterprise: Innovation 2017 mean to you?

When I heard the news that we won a Queen’s Award, my initial reaction was “Wow, that is so cool!” And then I thought, “Of course we won.” I take great pride in the work we do at Creative Virtual and know we are doing a great job, so I wasn’t surprised that we won such a prestigious award. It really is confirmation that we are at the forefront of the virtual agent field. Both as a group and individually, we are always driving towards excellence, and the award reaffirms for us that we are delivering a high level of expertise and quality to our customers and partners every day. 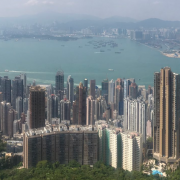 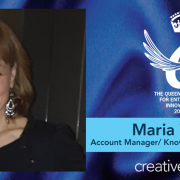 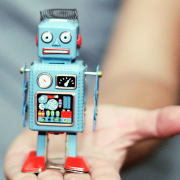 Don’t be a Robot: Are Instant Replies Always Best? 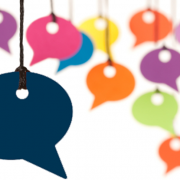 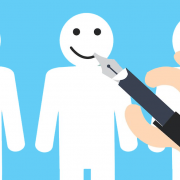 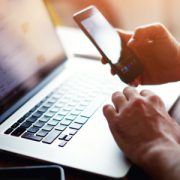